The Broncos are in the Super Bowl! (But Be Safe After the Parties) 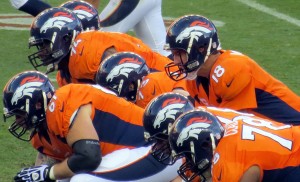 Here we go again! It wasn’t that long ago that the city was alive with the same excitement and dreams of a championship – but it does feel a little different this time. Is it going to be Peyton’s last season? No one can be sure until he makes the announcement, but it certainly seems that way. Around the D’Angelo Law Office, we’ve got Bronco fever. With any luck, we’ll be watching the victory parade around a week from now!

What does everyone think about when it comes to the Super Bowl? (Other than commercials) Parties of course! A Super Bowl party can be a blast, but you need to take precautions when attending. A locally-brewed Colorado beer goes hand-in-hand with a Broncos’ Super Bowl appearance, but not so much if you’re driving.

The last time the Broncos appeared in the Super Bowl, Colorado law enforcement officials arrested 321 people for DUI.[1] Frankly, this is ridiculous. Like the Broncos, preparation and having a plan before you go and enjoy the Super Bowl at a bar or party is the key to avoiding problems after the game. So have a plan for how you will get home after the game. Here are a few options you have OTHER than driving after you’ve been drinking:

With this many options, there is absolutely no reason for anyone to get behind the wheel of a car after they’ve been drinking. As the saying goes, “don’t be another statistic.” We aren’t saying you shouldn’t enjoy the game with your friends, we’re just asking you to keep yourself – and others – safe by avoiding very poor judgment and getting behind the wheel drunk.

As always, get in touch with us if you need helping dealing with an injury resulting from negligence like a DUI.